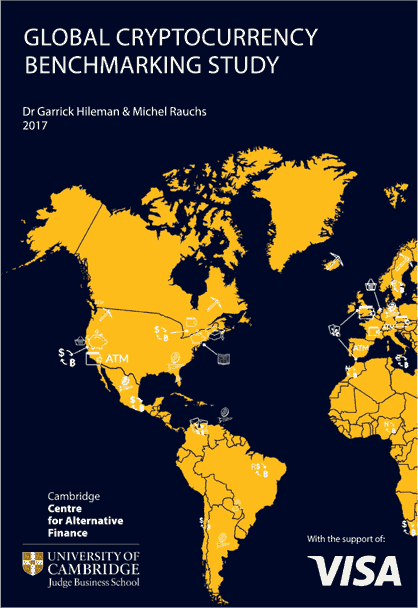 If you’ve been following along, you know that cryptocurrency refers to digital payment systems built on Blockchain. The best known cryptocurrency is, of course, Bitcoin. But Bitcoin is just one of many hundreds of different coins.

At Xmark Labs, we are generally more interested in Blockchain itself than cryptocurrencies. But that doesn’t mean we don’t love a good report now and then. And this one is a doozy.

Dr Garrick Hileman & Michel Rauchs of the Cambridge Center for Alternative Finance just published a massive, 114 page study of cryptocurrencies. CCAF is part of the world-renowned Judge Business School at Cambridge University. You might have heard of Cambridge University. They’ve done one or two things since their founding in 1209AD (like that other Apple guy).

The “Global Cryptocurrency Benchmarking Study” digs in to just about every aspect of the cryptocurrencies, from exchanges to wallets to payments and mining. The researchers gathered data from 144 companies and individuals working with cryptocurrencies.

As you’d imagine, there’s a lot more detail in there. It’s definitely worth a read.

The report is freely available. You can download the Global Cryptocurrency Benchmarking Study directly from the CCAF website.