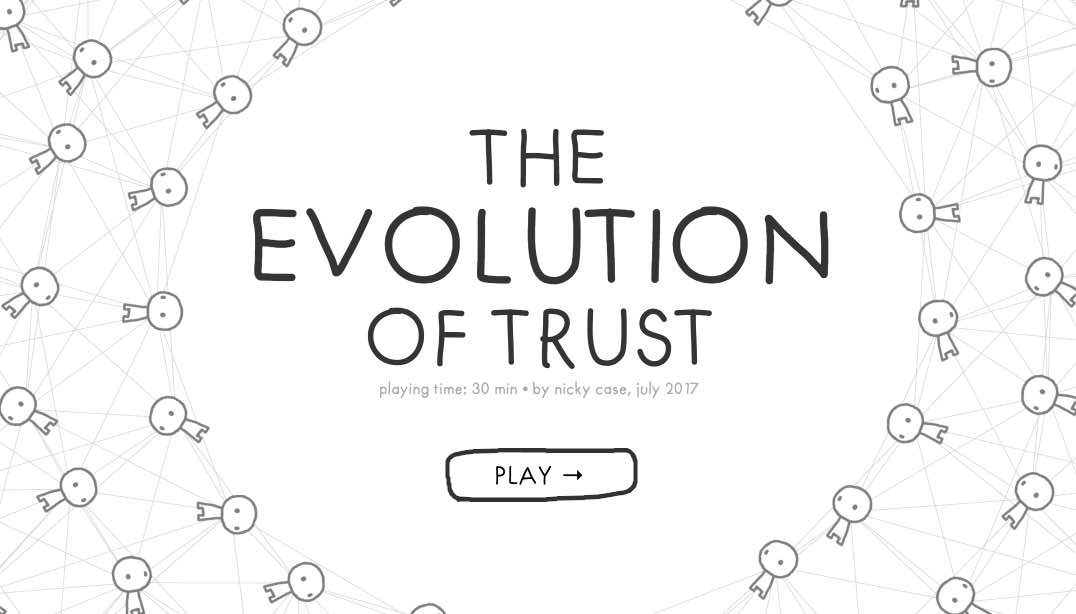 If you study mathematics in any undergraduate or postgraduate capacity, you quickly learn that subjects with simple titles can be terrifying.

I think it is easy enough to recognize that “Computational Fluid Mechanics” could be tricky. But “Game Theory“? That sounds easy!

Game theory is “the study of mathematical models of conflict and cooperation between intelligent rational decision-makers”.

The subject is dense and requires a deep understanding of multiple areas of mathematics.

The closest most people may have come to Game Theory is the movie, “A Beautiful Mind”. It was a loosely biographical story of John Nash, a giant in the field of Game Theory. The movie mostly focused his diagnosis of paranoid schizophrenia, but it does touch on some of his mathematical work.

A friend recently recently shared this link with me. It’s a delightful and well explained introduction to one aspect of Game Theory: the way trust evolves over time. The creator is the obviously talented Nicky Case and  the site is well worth checking out.

Who Cares? Why is this important?

Trusting is a very important action in everyday life. Trusted people probably include your friends and family. You are somewhat trusting with your bank (maybe). Perhaps you have trusted teachers? You probably don’t trust your politicians.

Throughout history, trust has often relied on some highly centralized third party. For example, you are trusting the Federal Reserve that your $5 bill is actually worth $5.

But when you centralize trust, it can be subject to fraud and corruption.

The world financial market collapse of 2007-2009 was largely caused by a combination of excessive greed and a failure of trust. Ratings Agencies, groups that we all trusted to keep the banks somewhat honest, failed to do their job. You could argue it was a deliberate failure, or you can claim they were just asleep at the wheel. Either way, they failed to provide the trust they should have provided. The subprime mortgage mess spiraled out of control and things got messy.

As an aside, if you have not watched it, go watch “The Big Short“. It will make you mad, but you’ll also gain a much better understanding of what happened.

It is very easy to make moronic statements about Bitcoin being a massive fraud. It’s also easy just to shrug off some of the claims made by Blockchain fans. How can a computer program ensure trust? At first glance, that seems absurd.

But that’s why Nicky Case’s example is so important. It entertainingly demonstrates how you can use maths to describe trust. Understanding that concept is key to understanding a big part of why Blockchain can rewrite the world.

Seriously, go check out The Evolution of Trust. It’s well worth your time.